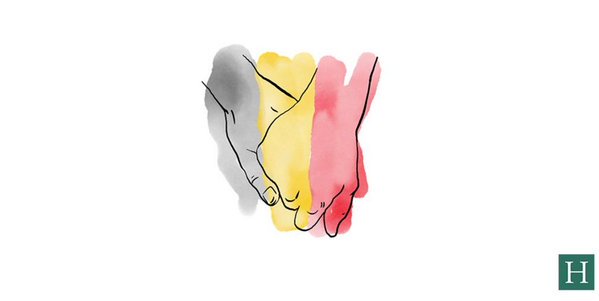 Was the most used sentence in Brussels. It was day 2 of 3 and we STILL HADN’T GOTTEN BELGIAN WAFFLES!!! Around midnight we (Kelsey, Jackie, and I) finally decided to leave the house after another dinner cooked in our air bnb to grab a few waffles around the corner.

-PS: I have to admit it was pretty much just Jackie and Kelsey cooking because I clearly have a hard time in the kitchen. However… I do know how to cut an avocado and it’s Brussels fault, not mine, that the avocado was basically rubber and inedible.

There are 1 euro waffles signs all over Brussels. We picked one of the 100 and the waffles were ah-mazing. Mine had whip cream, strawberries, and a green, chewy, gummy of the Peeing Boy. 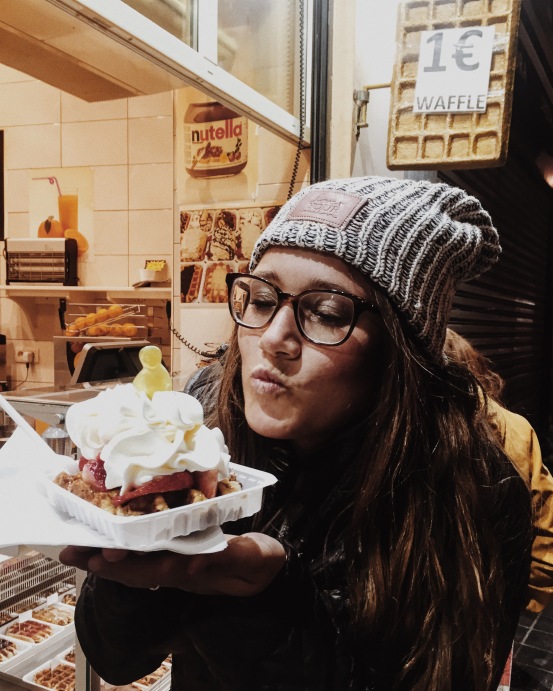 The Peeing Boy AKA Manneken Pis

Located very close to Grand Place and only a 4 minute walk from the air bnb I stayed at is a little tiny statue of a boy peeing. It is a main tourist attraction in Brussels. Que signigica? Well, there are many rumors/legends of why this bronze statue was erected, but no one seems to know the real reason why. This little guy is frequently dressed up for celebrations in Brussels. When I was there, there was a man dressed up as Angry Bird leading a tour, on National Happiness Day… hmmmmm..

We spent our first day and second day in Brussels and Bruges admiring the beautiful architecture, learning about the history of Bruges in the Historium Museum, aimlessly walking down elaborate streets, and trying as many beers and chocolates as possible.

On the third day, we were woken up by sirens and Kelsey running into our room yelling,

“a bomb just went off in Brussels.”

All three of us received tons of messages from CIEE, our schools, our friends, our family. We were a 20 minute walk away from a suicide bombing that took away 32 innocent lives and around 100 others were injured. Here is a link of all of the victims who passed away. We were on the phone with the US Embassy and our parents on and off all day. It was terrifying. The sirens didn’t stop, we were scared to leave the house, and every metro, bus, and airport was shut down. All we wanted to do was get out. We were told by the US Embassy to avoid big crowds. Much later in the day we got news that two of the metros were opening up. We packed up our bags while brainstorming what to do and finally came up with what we thought was the best option to get out of Brussels. I was biting my nails a little more than normal and Jackie couldn’t stop shaking.

“These are the darkest days Belgium has known since World War Two, according to one Belgian politician.” -BBC.com

Around 4:30pm we left our house and began to walk about a mile to the north train station. There were a lot of people out walking and talking on the streets and it almost appeared as nothing had even happened. It made me uneasy.

As we got closer to the train station, hoping we could catch our train to Amsterdam, we saw 1000s of people packed in front of the station trying to get in. The Embassy told us to stay away from large crowds of people. There were 500 soldiers covered head to toe in camo accompanied by giant machine guns. I attempted to ask one of the soldiers what he thought we should do. He didn’t speak any English and at that moment we decided to quickly find a cab to escape the mass of people.

We took a taxi to Louven, a small city 40 minutes outside of Brussels, and hopped on the next train to Antwerp, Belgium. We got to Antwerp hoping we’d head straight to Amsterdam, but so many trains were shut down because of the horrible bombing. We had to think quick (while making friends with two friendly Belgium men over a cup of coffee). We quickly found a train to Rosendaal and arrived there after an hour or two and took one more train to Amsterdam. We arrived in Amsterdam at 11:30pm. We are able to take all of these trains with the ticket we had bought weeks ago because all of the train conductors were understanding and sensitive to the fact that we just got out of Brussels.

Brussels was attacked because it is a high target area for terrorists and has struggled with fighting Islamist extremist groups for years. This was, in part, a retaliation for the Paris bomber being caught a few days prior to the Brussels bombing.

When I got to Amsterdam, one of the major government buildings was lit up with red, yellow, and black to support Belgium. Other major sites around Europe honored Belgium as well such as the Eiffel Tower and Trevi Fountain in Rome.

It’s crazy to me how one minute you can be smiling and laughing while sipping a glass of red wine with your friends and then the next moment the ground you’re standing on is in total chaos and disorder. This tragic experience humbled me and it’s a day I will never forget. On Easter, I saw news about another similar event in Pakistan where 75, mostly women and children, were killed in a bombing. This attack was targeted at the Christian community, but killed Muslims as well. 29 being children and the majority Muslim children. I’ll never be able to wrap my head around these catastrophic events that occur all over the world everyday.

I hope one day, Brussels will not be a high target area for terrorists. It is an incredible and interesting city and I wish everyone could have the opportunity to visit and learn about their culture.

Also, I have heard a few people say things such as “Addison should come home”, “Europe is not safe right now”, etc. However, Europe is just as safe as the USA. For example, guns are not an issue in Spain, but you hear about casualties from guns almost every day in the United States. There are problems all over the world. In Turkey, Spain, USA, Japan, London, Belgium, but each country suffers with their own problems. No place is “safe”, but that doesn’t mean we should live in fear and that definitely does NOT mean we should stop traveling. If we stop traveling, we stop learning and that will lead to even more problems and relation issues with countries we know little about. We cannot let fear dictate our travels, because I know their is more good than bad in this world and the only way to experience the good is to become familiar with the unfamiliar.

I have learned more being abroad for one semester than I have during 3 years in college.

“You, and only you, are ultimately responsible for who you become and how happy you are.”  – Rachel Hollis